🌊 Standing out from the Sea of Sameness

Welcome to Level Up.

You’re getting this because you’ve signed up for an EntryLevel Program in the past to level up your skills. We’re glad you’re here!

Level Up is a newsletter with a mission: to help you win in the world of work.

We’re going to be talking all things world of work here - things like:

But this isn’t your boring career advice newsletter → It’s going to be fun!

So fun, that we’re starting off with an announcement..

Today is a very special day!

It’s Level Up’s day of birth, and we’re going to celebrate with some virtual cake, and some gifts for you.

We’re giving away 3 free passes for any EntryLevel program 🎁

One for you, and two for your friends, co-workers, parents, neighbours, etc etc..

🤔 Do you have a question about the World of Work?

We have a panel of amazing mentors and team members who may be able to answer some of your burning questions about work.

Reply to this email with your questions, and we'll pick a few to answer in the next email!

This week we’re going to explore the Sea of Sameness, show you the Three Circles Framework to stand out, and see how Samanvay used the framework to win at work 🏆

Soooo, the world is a bit crazy right now.

And I don’t mean the weird Minions trends on TikTok.

The economy isn't doing so well.

And if you’re in tech, you’re probably seeing a lot of layoffs and hiring freezes.

It’s not the easiest time.

If you’re looking for work - or even if you’re in a job - you probably know there is heaps of competition out there.

And it’s important to know that to employers, you’re not special.

To explain why, we’re going to explore the Sea of Sameness 🌊

The Sea of Sameness 🌊

You’ve just finished your degree, completed a couple of online courses and maybe even done some extracurricular activities.

With a smile on your face, you set sail on the next chapter of your life.

Then you see hundreds, thousands  - no, millions - of boats just like yours setting sail next to you.

To an observer on the outside, all the boats look the same.

If they were to choose one, it would be at random. Or, it might be because one boat has a more colourful sail.

It’s both a humbling and scary thought to think that there are a lot of people competing for the same role as you.

If that wasn’t bad enough, we have two tsunami's on the way that we call:

The pool of prospective candidates has increased exponentially. With a small global world, companies can now hire anywhere in the world, which means even more competitive than ever before.

There are jobs that just no longer exist. We’re seeing more companies today make more money with less people than ever before.

This is a real and tangible example of how automation is reducing the pool of jobs.

There is an army of talent out there looking for a job, and there are less jobs out there.

So, how do you stand out in the Sea of Sameness?

Well, it starts with some soul searching, then some hustle, and some personality.

This framework below is one of the best tools you can use to make you super valuable in your current role, or give you the best chance of getting a new job.

The Three Circles framework is simple:

Figure out what skills you have, what your interests are, and be proactive to put them together.

Then, you’re playing a game you can win.

Let’s run through it.

Are you great at Data Analysis? Awesome.

There are probably millions of other data analysts like you.

Great! There are probably millions of people who love this too.

But how many data analysts love creating video content?

Less people in the pool of talent.

You might be thinking ‘damn, thats still a lot of competition.’

Here is the kicker, though.

This is the third circle - do you have the guts to do something about these two skills and create something unique?

Once we add this in, we’re looking at maybe 100 people.

That’s the thing - people will always ‘out-skill’ you.

There is someone better than you at everything.

But few people are proactive, and go and make something out of their unique set of skills.

And that’s exactly what Samanvay did.

Standing out from the Sea of Sameness 🏅

Samanvay’s skills were in Data Science.

So what did he do?

He put them together to create his youtube channel, Demystifying Data Science.

Samanvay built up his channel, posted about it on social media and made it really easy to be found.

He’s been reached out to by recruiters in the past, and has landed consulting jobs from people who watched his youtube channel.

And last month, he started as a Deployment Strategist at Palantir after being head-hunted by their team.

Samanvay combined his skills (Data Science), his interests (video content) and made something out of those skills (a youtube channel).

So to recap, ask the three questions:

If you come up with something new, or are already working on a project, reply to this email to let me know. We’d love to share your work with the world! 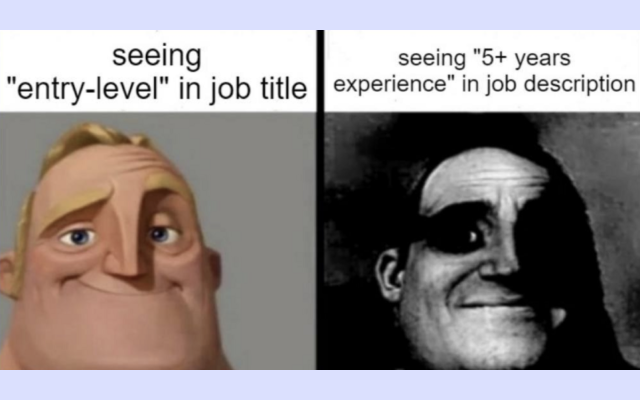 5 step guide to break into tech in 2023: with NO CODING NEEDED Back to blog homepage
What is EntryLevel?
EntryLevel helps you learn and get experience so you can get hired in tech. Beginner-friendly 6 week programs guide you to create a portfolio you can show off to employers.
Browse tech programs